Look Who Got Caught: Richardson Chihuahua 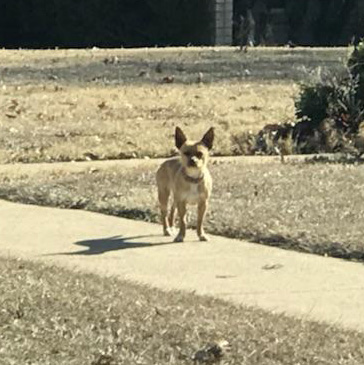 On January 1, we were contacted by a Good Samaritan, Holly, who said she and her neighbors had been trying to catch a loose Chihuahua that had been seen in their Richardson neighborhood for about 2 months. We set up a feeding station but so many neighbors were looking after her, she rarely came by to eat.

A few weeks later, neighbors started seeing her regularly at a different location so we moved our feeding station and started the conditioning process to get her used to eating in the trap.

The location was near a walking path so the station had quite a few visitors (including one grumpy gentleman who wasn’t too fond of our trap) but pretty soon, our girl started visiting the trap regularly to eat. We set the trap a few days in a row and we missed her every time, but this past Saturday, Holly went out early in the morning with some QT hot dogs and baited the trap and sat in her car and waited. Holly was just about to pack it in when the little Chihuahua came out for breakfast and went into the trap!

Holly took her straight to her vet office where she was scanned for a microchip and luckily, she had one! The vet contacted the owners who came right away to pick her up. The family actually lives in Arlington but they were visiting family in Richardson a few months ago when their little dog got out.

This was Holly’s first capture and in all the excitement, she forgot to get the dog’s real name or take pictures, so we apologize for that but we are very excited that our little runaway is now back home with her family where she belongs. Thank you to Holly and all the neighbors who looked after this sweet girl while she was on the streets. #SemperWoof #ThinkLostNotStray