Look Who Got Caught: Otis

A picture can be so powerful and we only need to post one picture of this capture to prove it! This sweet dog found himself alone and abandoned in a neighborhood in East Dallas. The neighbors pulled together and they were able to corral him in a backyard but once he was in the backyard, no one could touch him. As they were trying to contain him in the backyard, he threw himself against the fence and hurt his leg. They sent an email and asked for capture assistance and one of our capture team volunteers went out to assist. It took a couple of trips but with patience and perseverance, they were finally able to handle him and get him into a neighbors car. Once inside the car, he was taken to the vet to get checked out. They’ve named him Otis and the last we heard, he’s doing great! 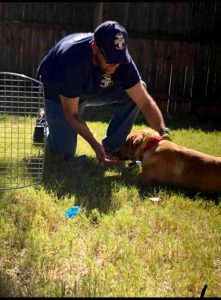